wow! is this vanilla bitsy? who would have thunk!!

P.S. no i have no clue how to make the blank dialogue boxes to go away.. bitsy kinda seems to hate and im just fed up, plz just.. ignore them

I love how the summoner is just not taking this seriously. And their dynamic is amazing!

haha thank you!!! this totally has not inspired by me having to study a lot for a test x2 and being very fed up with everything, nope, not at all 😂

Hey! This was really good! I got here from the front page, not from the jam :) I don't know if there's more content after talking to the demon? It kinda repeats after that!

thank you for playing! i'm glad you enjoyed it!

aaa i love it

Oh no! I wanted to rated this because I forgot an a accidentaly gave it 3 stars... I laugh so much It deserves 5! Sorry

haha u can always edit rating but either way, i wouldnt hold it against u haha

im glad it made u laugh!!!! i wrote it as a way to laugh abt all the studying im currently doing.. did it sound a little too much like venting? well yes! thats exactly what this was >.<;;

Oh really? I had no idea (sorry I'm kind of a noob here jet) I'll change it now.

I actually think that the reason why I was so happy with the game is because I'm more or less in the same page. I'm still a highschool student and they are killing me even on quarantine... oh well.

i guess the difference is that i chose this and can quit any time,, its an online program but like very intense and serious.. ^^;;

you totally got this tho 💪

Sorry if our conversation is getting too extended but I just wanted to say that that is awesome... me too, when I start making my own money, would love to do online courses/programs. Good luck!!!

haha its chill! thanks!! i'm pushing through! thankfully this is a free program so i won't lose much should I fail but yeah haha

yeah its good to have an income just to take advantage of things like coursera, skillshare and lynda.com  if u have time though for most when u have time (i've had plenty) i usually did 7 day trials of coursera courses and just watched all the videos for all 3-4? courses that gets unlocked and copy assignments into a google doc to do later if i feel like it (also some videos can be downloaded or if not, all have a transcript i also saved in a google doc with some screenshots); skillshare.. i did a free trial by using a youtuber's promo code and then when i was cancelling, they didn't want me to leave after i clicked that its was the money and they gave me another month free??; oe could be free through ur library card which is hella sweet! sorry if you do know all this but thought i'd share! i like this bc its not like actually doing a course/class but your gaining more knowledge.  If you just want to learn on your own terms and also don't need certificates (i think thats rly only coursera), thats my methods :P

The thing i'm doing was supposed to be a like actual program, not online so that's why its so formal/serious (zoom meetings etc.) They also gave me a 2 month free linkedin learning licence which is cool. That's also a thing- its similar to lynda (i think its now the same company etc), maybe almost the same video library (i havn't checked) but just more select and branded mm

as said it all depends on time! also i mean youtube does have so much.. oh humblebundle does a lot of bundles where some are video courses and first tier is usually like $2 (well its either 1 usd or 1.50 cad i guess) which if you have any money at all can be nice..

i have no clue if any of this is relevant,, ur a teen, u prob know a lot or maybe schools talk abt resources >.<;; i have no clue how teens are these days,, (im 24 and still feel like a baby but yeah i've been out of college for a couple of years by now ^^;;)

this has been my natural progression from i guess saving every art tutorial i found on deviantart bc that's what i did when i was in highschool lmao and read a lot of manga........ idk if there was a lot of youtube videos back then and they just weren't on my radar.. now gosh theres a lot of good tuorials and things there. mainly skillshare is good for art.. but thats moneeey so..

made me like demons for a sec....lol great game

this was so good. the writing is really funny

This gives me some real Tragical History of Doctor Faustus vibes. I love it!

:D That was fun. So many funny lines and what a conversation!

thanks! began with venting... got derailed by talking abt demon stuff?? i had to google some stuff for this god i don't think i ever did research for a bitsy game xD

It worked really well. The dialogue felt  natural even though you were talking to a demon. :D

Nice! Some LOL moments there.

i was legit so mad at studying terms that i was like "so what if.." and then as i wrote it.. i just began to amuse myself more and more at the direction the dialogue began to go xD 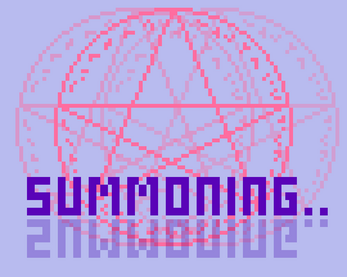